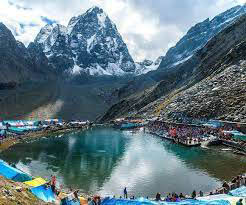 The paradisiacal land of Himachal Pradesh is home to many historical and religious sites. The state boasts of several exciting pilgrimage trails leading to sacred temples. The Manimahesh Yatra is one such pilgrimage, which starts from Lakshminarayan Temple in Chamba and ends at the Manimahesh Lake in Bundhil valley. The Manimahesh Lake is believed to be one of the abode of Lord Shiva as per the Hindu mythologies.
The holy trek or Yatra is set about fifteen days after the festival of Janmashtami. The pilgrims walk along the rocky path completely bare footed, singing Bhajans and praying ecstatically to Lord Shiva. After reaching Manimahesh Lake, they take dips in the holy water. With the termination of the Manimahesh Yatra, the devotees visit the ancient temple of Chatrari, which is located between Bharmaur and Chamba.

Manimahesh Lake (also known as Dal Lake, Manimahesh), situated in the Pir Panjal Range of the Himalayas, is a high altitude lake (el. 4080 m.). The Manimahesh Kailash peak stands high close to the lake. The religious sanctity of this place is next to the Lake Manasarovar.

The route to Manimahesh is via Chamba, Himachal Pradesh, Bharmour and Hadsar. Motorable road goes till Hadsar. The rest of the path is to be covered on foot, about 13 km of steep climb by the banks of Manimahesh Ganga, which originates from the Manimahesh Kailash peak. During the annual pilgrimage in August – September, numerous night-shelters and eateries spring up by the trekking route. Night-shelter is also available at village Dhancho, about 6 km from Hadsar on the way to Manimahesh, round the year. Another less frequented trekking route originates from Holi, which is connected to Chamba.

Walking to the way of the Manimahesh Lake is a wonderful experience. One will forget the pains of the tiresome journey watching the wonderful natural scenery and get drenched in the enchanting ambience. This wonderful route not only excites the pilgrims but also, the adventure lovers and tourists. However, one should be physically fit to endure this journey in an altitude of 4080 meters.

The name Manimahesh signifies a jewel (Mani) on Lord Shiva’s crown. Local people claim that the moon-rays reflected from the jewel can be seen from Manimahesh Lake on clear full-moon nights (which is a rare occasion). It is more likely to be the light reflected from the glacier that adorns the peak, like a serpent on Shiva’s neck.